When Santa was a woman… 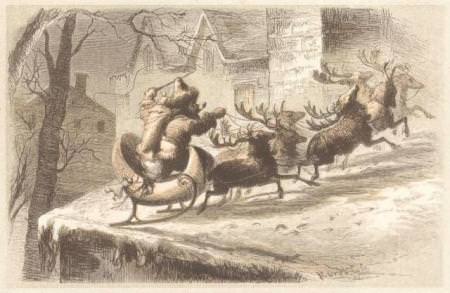 27 Dic When Santa was a woman…

The Roman writer Tacitus tells us that at midwinter the goddess Nerthus — whose name was synonymous with Mother Earth — rode a “sleigh-like wagon” pulled by oxen. Wherever she went, she spread holiday cheer and peace. “It [was] a time of festive holiday-making in whatever place she deign[ed] to honour.” Along with bringing holiday cheer, wherever Nerthus went, “nobody [went] to war, nobody [took] up arms.” [19]
“Eventually Nerthus was superseded by two goddesses, Freya and Frigg. At midwinter Freya was incarnated as Mother Christmas in rituals all over western Europe, touring the countryside in a wagon, though hers was pulled not by oxen but by cats. Later, her presence was represented by wise women who were possessed by her spirit. [20]”

There are loud echoes of Nerthus’ sleigh-like wagon in Santa’s sleigh. Of course the oxen (or cats!) became reindeer, and the sleigh now flies, but one thing remains unchanged in the millennia since Mother Earth was the central figure of Christmas. Wherever Santa goes, he brings holiday celebrations and (at least wishes for) peace on earth.